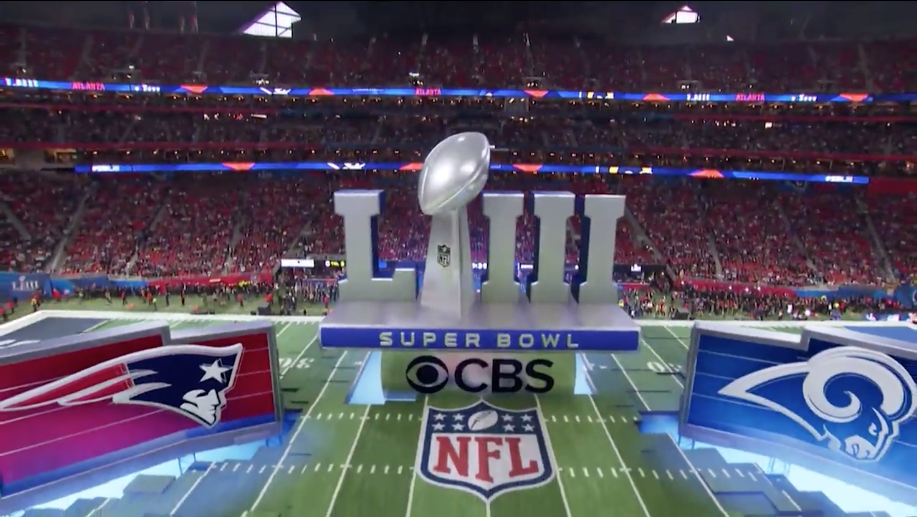 In another busy year full of sports events across the nation, CBS Sports jumpstarted its 2019 with Super Bowl LIII in Atlanta’s Mercedes-Benz Stadium last month. A lackluster game might have soured viewers, but, throughout the broadcast, the network kept fans informed, engaged, and astounded with a newly created assortment of graphics. At the 2019 SVG Sports Graphics Forum this week, attendees heard firsthand accounts of the early planning stages, the development process, and on-air execution from the folks who put the package together.

“[The conclusion of the 2018 AFC Championship Game] began a year of endless meetings, sleep deprivation, and blood, sweat, and tears,” reported CBS Sports VP, On-Air Graphics and Design, JP LoMonaco, who moderated the panel. “As an on-air presence with the look of our graphics, we hoped that resulted in something that was incredibly successful.”

Know Before You Go

In recent years, networks hosting the Super Bowl have endeavored to minimize onsite clutter by bringing only the essentials to the venue and stretching the budget to its limits. The Eye Network followed the trend by solidifying a creative core that would be on the ground in Atlanta. Compared with CBS Sports’ previous Super Bowl effort, in 2016, the number of designers and artists onsite was reduced from 12 to only five.

To bridge the gap between Mercedes-Benz Stadium and the production team at home, constant communication between the production truck and New York was imperative to ensure a smooth show. Although the plan would be beneficial in the long run, LoMonaco faced a challenge in deciding who needed to stay behind to hold down the fort.

“In the past, it was, ‘Everyone pack your bags and get down to wherever the Super Bowl is.’ This time, we were asked to split the teams,” he said. “The logistics included who has to stay home, how to communicate with them, and what skillsets need to be onsite. A complicated process became more complicated by fragmenting the team and creating a wide workflow.”

Despite low bandwidth within the venue in Atlanta, CBS Sports was able to leverage all its manpower and equipment to pull off a stunning opening sequence in augmented reality.

“[With the help of NCam and SMT,] we used four cameras — a Skycam, a jib camera, a Steadicam, and a wireless Steadicam — which has never been done before,” said CBS Sports Director, Graphics Production, Drew Simon. “We more or less asked these people, a group of about 14 or 15 and spanning six or seven countries, to basically uproot their lives for two months and travel with us to Atlanta from the AFC Wild Card Game [in Baltimore], to the AFC Divisional Round in New England, the AFC Championship in Kansas City, and back to Atlanta.”

The NFL’s grandest stage in a new stadium deserves graphics of its own. To live up to the billing, CBS went to work on a new graphics template. Conceptualization by a creative could be seen as the easy part for CBS Sports Art Director Komal Bhukanwala, but the hard part comes with not straying too far from the branding the network had used three years prior for Super Bowl 50. The team evaluated what should be carried into the new portfolio.

“Normally, when we hit our three-year mark, we do a complete refresh and have new elements to work with for a new design, but, this time around, it was totally different since we loved what we did for Super Bowl 50,” she said. “We began speaking internally and decided what concepts we wanted to hold on to and what we wanted to let go of.”

After trimming the fat and making the necessary adjustments, CBS was ready to proceed with the package, which would branch out from the redesign for the Super Bowl’s golden anniversary by going back to the fundamentals and relying on a new provider.

“We went back to the beginning with the basics,” explained CBS Sports Graphics Director Mark DeFrancesco. “We took all the pieces and parts that made the graphics package exciting, took key moments — frontends, player comparisons, game summary —and put them back together and jazzed them up while making sure to keep the functionality that the production has become accustomed to. This is the first season that we’ve [used] ChyronHego,” he added. “We’ve been transitioning to ChyronHego across all of our insert-graphics packages for the past two years, so this was the culmination.”

When the Rubber Meets the Road

Continuing with a discussion of the planning, CBS Sports Graphics Producer Tara Kafer emphasized the importance of fleshing out the deliverables.

“You want to build your package starting with the deliverables,” she noted. “The core foundation of everything is being smart on what you need not only for the studio but [also] for the remote: stretching those out and getting the most for what they are because something’s going to happen [later on.]”

When wheels touched down in Hartsfield-Jackson Airport, the real test began, Kafer added. The short period leading up to the coin toss can determine the outcome of a broadcast. “We’ve planned for months and years, but it’s the eight days onsite when you’re really in that mode of people looking at things. The deliverables are the driving factor.”

Blending Ad Sales With the Art

While the game is hot over the airwaves (and during the hours counting down to kickoff), CBS Sports Graphics Producer Tracy Morris is more or less in charge of making sure that the bills get paid with implementation of ad sales, promotions, and sponsorship. On game day, 10 sponsored shows were conducted from 11:30 a.m. until start time on the nationwide feed, as well as a continued postgame on CBS Sports Network. The schedule of programming may have been set in stone, but the largest problem for Morris and his team came in the form of creating a graphics package without nailing down confirmed sponsors.

“We didn’t know who the sponsors were,” he noted. “That comes with its own challenges because the NFL has many restrictions. Whether [a company] is or is not an official league sponsor determines different rights for using NFL marks. The whole Super Bowl logo is an NFL mark with the Lombardi trophy. We decided to come up with a package that allowed us to give space between the [NFL-sanctioned] logos, sponsors, and our design. It was a smart solution that made our production and creative teams happy.”