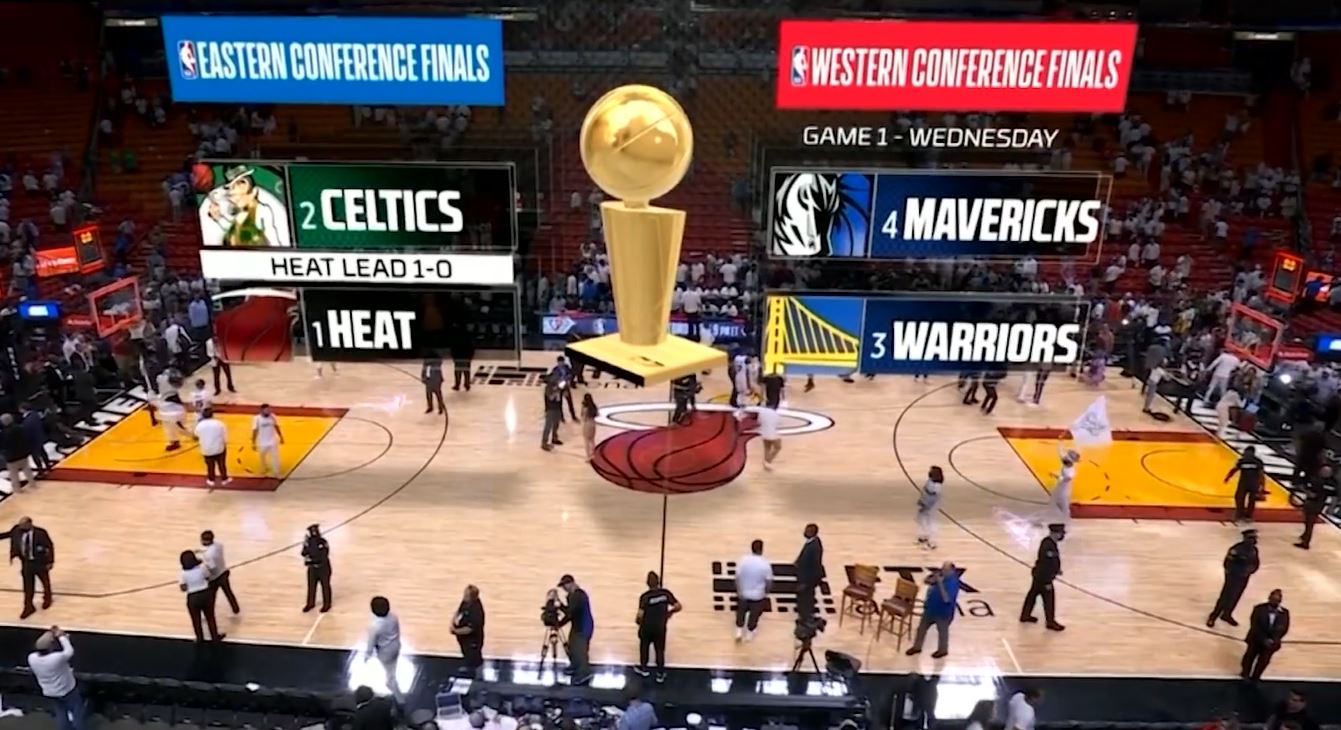 It was less than two years ago that ESPN/ABC’s NBA Finals production operations were confined to a standalone bubble inside Disney World in Orlando. This year, ESPN’s ops team is back on the road in full force, rolling out two of the largest NBA production footprints of the year on opposite coasts: at the Chase Center in San Francisco and TD Garden in Boston. And ESPN has found a way to pull it off even given the unprecedented crewing, shipping, and supply-chain issues facing the entire industry.

“It has been interesting this year, considering the challenging environment for [truck] drivers, resources, and shipping right now, but the Finals is what our entire team lives for. It’s why we love covering the NBA,” says Eddie Okuno, senior remote operations specialist, ESPN. “Our crew has been on the road for over 30 days straight at this point, and we have put in some serious miles going back and forth between Miami [for the Eastern Conference Finals], Boston, and San Francisco, but everybody is doing an incredible job despite the challenges.”

Despite the logistical issues, ESPN has once again pulled out all the stops when it comes to its coverage on the court. Among the 55 cameras being used for ABC’s NBA Finals broadcasts are 17 high-frame-rate super-slo-mos (many of which are Fletcher robos), two RF shallow–depth-of-field mirrorless gimbal rigs (one courtside, one roaming), a 1080p Skycam system above the court, a live drone (operated by Disney’s in-house specialists) flying above the arena, and Winged Vision fixed-wing plane overhead.

Although courtside shallow–depth-of-field cameras have become a staple of NBA coverage of late, ESPN is putting its own spin on its sideline position. The system — which comprises a Sony Alpha 1 mirrorless DSLR camera affixed to a smaller DJI Ronin gimbal and equipped with an AVS RF link — has an ultra-small footprint, allowing the operator to be stationed directly behind the announce table.

“Those are truly incredible shots,” says Okuno, noting, “The positioning [of the operator] and the size [of the rig] are so important in order to get those shots. If you had a traditional Steadicam and a big-block shallow–depth-of-field camera, the size of the rig would limit you that close to the court. But the Sony Alpha and DJI Ronin gimbal gives us that shallow–depth-of-field image with a very small [footprint]. The camera operator literally sits at center court behind the announce table, and you can’t even see him.

“A lot of times,” he continues, “these types of cameras are stationed deep in the vomitory so, by the time they run out to the court during a timeout, they are usually already too late. But, since the footprint of this camera is so small, [the operator] can be right there ready to go. He gets the shot, doesn’t block any fans, and then gets out of the way, so it works out very nicely.”

ESPN is working with all-Canon glass, including a mixture of UJ122x8.2, UJ111x8.3, and XJ95x8.6 field production lenses and a variety of Canon UHD ENG handheld lenses.

In addition to the army of cameras, ESPN has deployed Viz Arena virtual court signage, SMT/Vizrt virtual overlay over the Skycam and one slash camera, and three AR virtual-graphics systems with TrackMan (for the show open and third-quarter rejoin).

On the audio side, ESPN has boosted its total microphone complement for the 5.1 discrete audio mix for the Finals and Eastern Conference Finals, including more Q5X player/coach/referee microphones, more DPA 5100 surround-sound mics, and plenty of SoundField mics and processors.

Inside the Compounds: ESPN Goes Coast to Coast

Game Creek Video 79 mobile unit (A and B units) and Victory (A and B) were on hand at San Francisco’s Chase Center to serve as the home for ESPN’s Games 1 and 2 productions — along with Game Creek Gotham for the onsite studio show. Tonight in Boston, NEP EN1 (A, B C, D, and E) kicks off its NBA Finals shows with Game 3 and is joined by NEP EN3 (A and B) to handle the studio show.

Although ESPN has a sizable crew onsite in both cities, all graphics (including inserts, scorebug, and virtual signage) is being done REMCO-style by operators in Bristol, CT. In addition, four EVS replay operators are controlling servers remotely from Bristol (with 13 replay operators onsite).

ESPN also presented an NBA Finals: Celebrating 75 alternative broadcast during Game 1, which was produced with a REMI workflow using the onsite Game Creek Video infrastructure. The show was hosted by CJ McCollum and Tim Legler at ESPN’s Seaport Studios in New York City and was integrated in a control room in Bristol. All remote interviews with guests were conducted via Zoom or TVU IP uplinks (with the exception of the Magic Johnson–Spike Lee interview at Chase Center, which came from the truck onsite).

Although the Golden State Warriors were Finals regulars throughout the past decade, this marks the first time that the Chase Center (opened in 2019) has hosted an NBA Finals game. As a result, ESPN’s ops team had to start from scratch when it came to building the truck compound at Chase Center in one of the most densely populated cities in the country.

“Even though the Warriors are back in the Finals, it was a completely different venue for us,” says Okuno. “We moved from the East Bay in Oakland, which had a very large open parking lot shared with the [Oakland] Coliseum where we could have the compound right next to the building, to downtown San Francisco, which presents a lot more challenges in terms of space.”

Okuno and his team worked closely with the Warriors’ in-house venue-ops team (which is working its first Finals because AEG handled operations at Oracle Arena, the Warriors’ previous home) to get out ahead of the logistical challenges, arranging for street-closure permits and shifting facilities around to accommodate the sprawling broadcast facilities at Chase Center.

“The end result is a very functional, very modern compound,” says Okuno. “The cooperation we received from the Warriors, the NBA, and all broadcast partners in San Francisco was spectacular. It was challenging at times, but everybody embraced it quickly and helped each other, so it turned out fabulous.”

ESPN also rolled out multiple onsite sets for shoulder programming at Chase Center: a pregame outside set in “Thrive City,” where the watch parties take place; an inside position at the Section 200 portal in the arena; and a courtside position in the northwest corner.

Onsite in Boston: Blowing a Hole in the Garden To Get the Job Done

Meanwhile, Boston’s TD Garden presented logistical challenges of its own. The surrounding area has grown significantly since the Celtics last hosted an NBA Finals game in 2010. Knowing that there would not be enough space in the normal TV compound (located in the E3 parking lot) outside TD Garden to house all the necessary broadcast facilities, ESPN, TD Garden (operated by Delaware North), and the Celtics reached out to Mass General Hospital (MGH) next door and were able to secure a large space in the parking lot on its grounds.

“The Celtics and TD Arena have been absolutely amazing: they literally blew a hole in the wall of the Garden right above MGH lot so that we were able to run all of our fiber into the Garden. That’s a lot to ask,” says Okuno. “We ran fiber the entire length of the Garden back to the E3 lot, which is where all our technical hookups are and dropped the fiber there. We extended the E3 lot technical-area connections over to the MGH lot to essentially create a mobile I/O panel inside the MGH lot.”

Instead of erecting multiple studio sets onsite as it did in San Francisco, ESPN worked with the Celtics and the league to secure space for a 24- x 24-ft. stage that is lower to the court in Loge 9 at TD Garden. All shows, including NBA Today, NBA Countdown, and pre/postgame and halftime shows will be hosted from this location for Games 3 and 4 (and, if necessary, Game 6).

Keep on Truckin’: Logistical Challenges Are No Match for Production Team

Even an industry heavyweight like ESPN can’t avoid the crewing, shipping, and supply-chain issues facing the entire industry. And, when it’s one of the biggest operations and highest-profile events of the year, failure isn’t an option.

“We’re living in a very challenged environment for [truck] drivers, resources, and shipping right now,” says Okuno. “The truck drivers, logistics people, vendors, and everybody that is grinding it out every single day deserves a lot of credit for making this all happen.”

Okuno cites Game Creek’s and NEP’s epic efforts following the Eastern Conference Finals as prime example of how the industry continues to thrive despite these tough circumstances.

“After Boston won at home in Game 6 and pushed it to Game 7 in Miami,” he says, “Game Creek had to strike the trucks, and they drove 63 hours straight to get to San Francisco. They left on Saturday at 4:00 a.m. and arrived at 11:30 a.m. on Monday, which is just unbelievable.

“Then NEP was in Miami to do Game 7, and Boston won,” he continues. “So, even though we were already set up in NBA Finals mode in a beautiful compound in Miami, NEP had to strike everything and drive up to Boston. We left the Game Creek cables intact at the Garden, and they were off and running. It’s a mix of Rubik’s Cube and Tetris to shift all these mobile units and get everything in place in just three days. But it has been absolutely incredible to see it get done.”