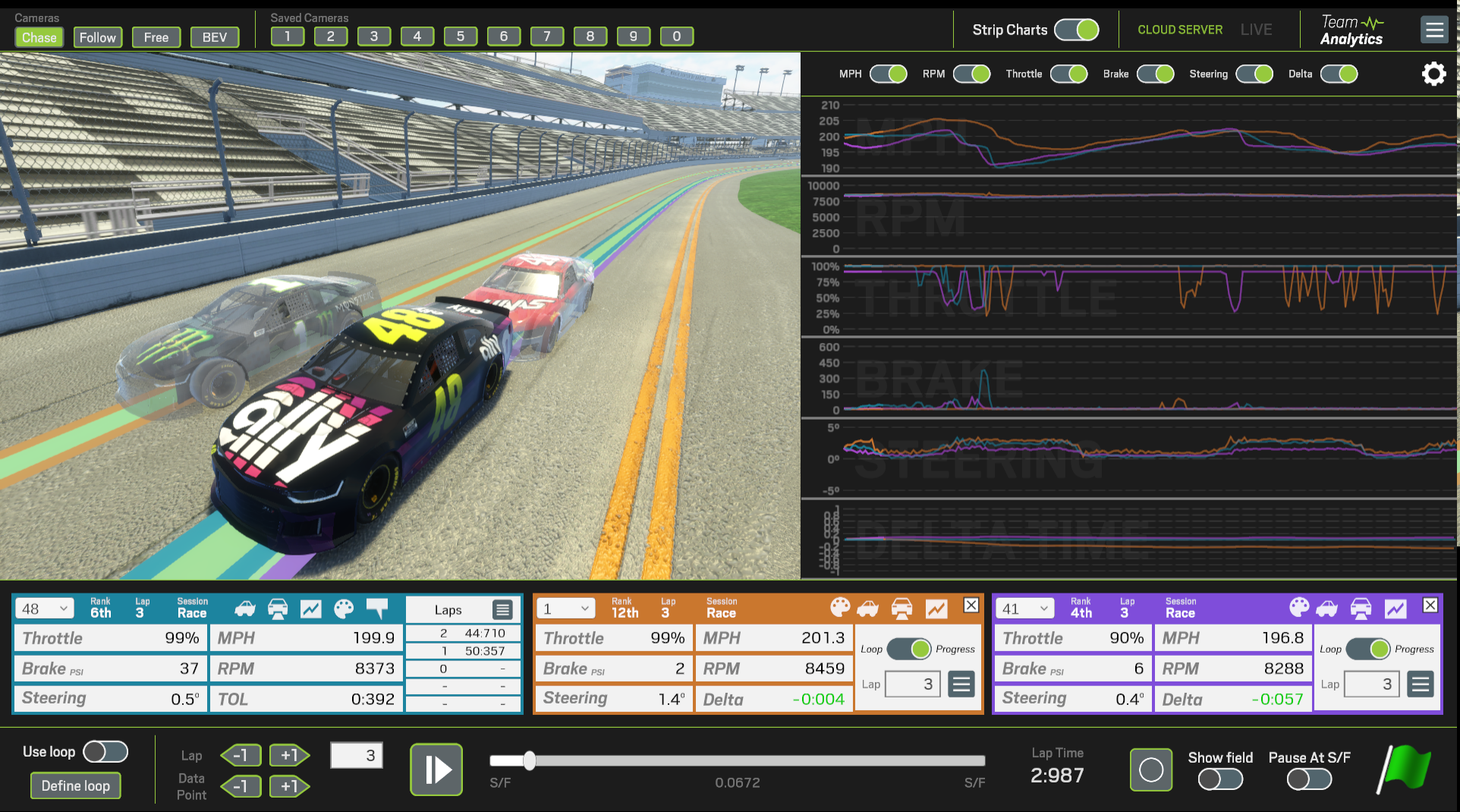 Over recent years, data-tracking and analysis have become engrained in the fabric of auto racing. On the NASCAR circuit, fans and drivers alike have embraced the practice to open up a new avenue of content and, in some cases, appreciation of the sport’s intricacies. At the heart of these efforts, SMT’s broadcast and team analytics are gamifying the Daytona 500 for younger viewers and enhancing the skills of NASCAR’s combatants to improve the overall product.

“The first year, we received input from teams and were also looking at other tools that they were using,” says Paulus Weemaes, senior director, motorsports, SMT. “We wanted to make it more useful for them, and we’ve done that for three years in a row now.”

The Hardware: Cars Get Fitted With SMT Vectors

To jump into the virtual world, there needs to be a physical and tangible item to grab the data. In every car on the grid at the starting line, a contraption known as a vector is clipped to the top of the roof and serves as the central hub for data gathering and retrieval as the radio antenna. Since each car needs to be visible on the digital track, NASCAR has penciled the installation of the vector into the pre-race routine.

“If the car shows up to inspection and doesn’t have the proper components, they don’t get to go through,” says Weemaes. “Every [participating] car that’s on the track, we need to track.”

This is the most difficult part of the process. Just like the stock cars that circle the track, vectors need time to warm up with a few warmup laps. When the GPS sensor on the device gets acquired and the six cameras used by Fox are tapped into, the SMT crew is one step closer to virtualizing the cars.

“When they do the first practice,” he explains, “it’s sometimes a little bit of a challenge to get the lock on the car. Worst case scenario, it takes one or two laps. During the race, connectivity and location [aren’t a problem] anymore since we upgraded the vectors with a much wider GPS satellite system.”

Although the car has a lot of moving parts that run off the same power source, the vector runs independently. It’s a strategy to maintain SMT’s autonomy over its own piece of technology.

“The vector itself gets powered by the battery,” Weemaes explains, “so there’s no car power that goes through this. We have our own little power unit. Which has another advantage because we can turn it on and off whenever we like.”

Back to the Drawing Board: Teams, Drivers Interact With Analytics

Aside from tracking on the course, the vector is critical to understanding the dynamics of the car itself. For teams operating in the NASCAR Cup Series, for example, the system is able to compute such other information as fuel levels, revolutions per minute, and speed. Coupled with 3D virtual renderings of the car, the numerical data is an application called Team Analytics.

“[Some other examples include] steering input, brake, and throttle points,” says AJ Mead, digital product manager, SMT. “On top of that, we also give them strip charts, so they can see what is going on all those [2D] telemetry data points.”

Sharing information freely wasn’t always the case. Prior to 2018, teams were not able to see the activity of other participating teams. After deep discussion and the decision to let the information go public, SMT was chosen to facilitate the transition.

“They came to SMT to offer some solutions, and that was pretty much the genesis,” says Mead. “It’s driven by Unity [graphics engine] on the front end, and, on the back end, SMT built the database that can archive every lap, every session, and every car.”

When it comes time to break down a driver’s session, pit crews can use specified software that allows multiple GhostCar overlays of previous races to adjust performance.

“Drivers can look at this [application] and say, ‘Why is this guy so much better than me? Oh, he’s doing this.’ Then go back out and make adjustments,” adds Mead. “From an engineering standpoint, they can look at this and realize that the driver is loose in Turn 2. Just by looking at the charts, they can make car adjustments.”

This application improves not only individual attributes but also the work ethic of other drivers. As the old saying goes, iron does indeed sharpen iron.

“Unlike anywhere else in motorsports, NASCAR opened up this data for everybody,” says Weemaes. “It has definitely brought the competition a little bit closer.”

The broadcast is fans’ way of seeing behind the data curtain. Talent like Mike Joy and Jeff Gordon are able to work with the virtual renderings from up in the booth.

“We had a scenario during qualifying last week, and the Fox team wanted to talk about ‘launch’ off of pit row,” says Mead. “We were able to go back to look and see the lines that they took to get up to speed for comparison.”

Besides for the race, SMT’s graphical content is used for a lot of Fox Sports’ NASCAR studio programming. At the broadcaster’s Charlotte, NC, facility, one weekly studio show in particular, NASCAR Race Hub, is tapping into SMT efforts, especially for post-race discussions.

“They will use this broadcast-analytics product to go back [and forth] ,” says Mead, “and their talent will talk through some certain scenarios.”

Inside one of Game Creek Video’s five onsite trucks, Nick Rider, coordinating producer, SMT, is consistently updating the real-time information that is pertinent to viewers at home on race day, such as positioning and time splits.

“When you see one car passing another one, you want to update [standings] live. That particular functionality is something that we provide live to the broadcaster in their truck,” says Weemaes. “We’ll have our official timing and scoring application running, and, in between, we can reset locations and dynamically switch the cars.”

To keep up with the pace of NASCAR, Rider and Fox Sports have six Viz Engines to generate the graphics as quickly as possible. In addition, Fox Sports facilities in Charlotte and Los Angeles will have access to the same data via a connected compound.

SMT’s role on the broadcast side of the Daytona 500 has no bounds. And despite being heavy on analytics, the ethos of each graphic is to educate and entertain in an engaging way.

It all depends on what story needs to be told,” says Phil Cochran, technical production manager, motorsports, SMT. “From pit comparisons to normal telemetry, there’s a multitude of graphics that we can show.”

Both team and broadcast data were seen as the Wild West a mere two years ago, but, with NASCAR’s blessing, professional auto racing is experiencing a technological boom in both an analytical and production sense.

From a team approach, it’s being fully embraced throughout every garage on pit row.

“We have some backend tracking and monitoring tools, and we see [these teams] on it every day,” says Mead. “We’ve tried to dial the controls to work for the drivers. The teams have it in their garage stalls and haulers. They have machines that are dedicated to running team analytics. It has become a regular part of their workflow.”

On the fan side, the available information can engage an audience of fans who comprehend the nuances of the sport and potentially crack open doors for a wave of new ones.

“In the beginning,” says Weemaes, “it was kind of a challenge with the drivers. But now we’re respected,”.