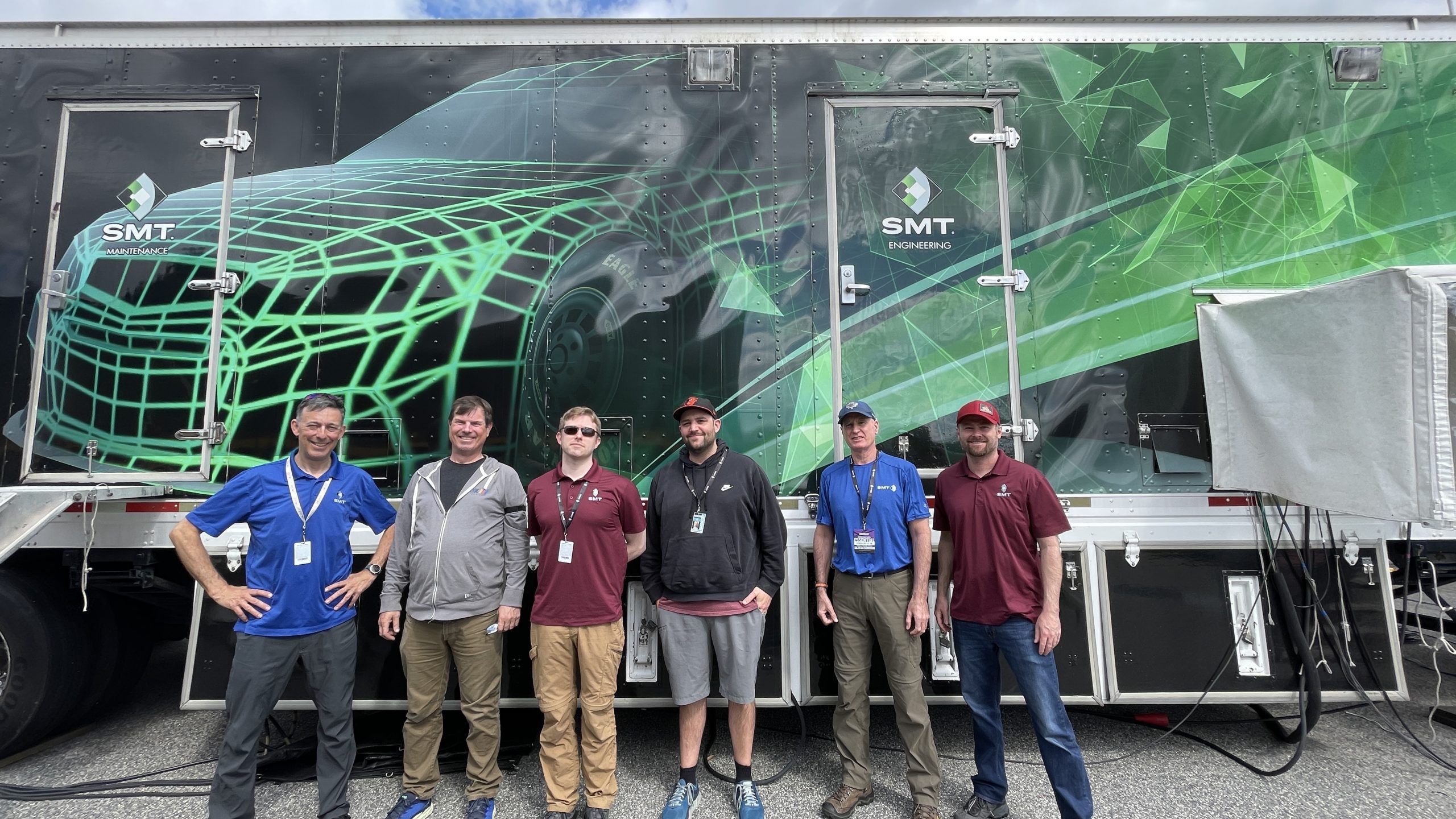 The 2022 NASCAR on Fox season will be marked by a handful of changes to applications seen on the broadcast. Aside from the show’s being in 1080p HDR, the network is rolling out a brand-new graphics package with advanced features for new and traditional fans. The new elements will include the hard work of SMT, which is supplying stats integration for real-time position tracking, enhancements to the virtual GhostCar, and driver information like heart rate and RPM.

“Broadcast elements have been completely redesigned this year, and they’re definitely the biggest lift we have ever done for NASCAR,” says Paulus Weemaes, senior director, motorsports, SMT. “Changing the look is fairly straightforward, but we’re now animating a lot of new features.”

Last year, after the conclusion of the NASCAR Cup Series, SMT participated in the offseason testing of NASCAR’s new Next Gen car model. After experimentation laps at Daytona International Speedway, Charlotte Motor Speedway, and Phoenix Raceway, Weemaes and company worked with the organization to develop equipment and broadcast solutions that would cater to the final version of the vehicle. By fall 2021, SMT collaborated with Fox Sports to bring data-centric information to the broadcaster’s new graphics.

From a creative standpoint, the company will continue to provide its own proprietary solution for the Restart Zone graphic, but, in an added twist, it will be animating the Fox Box after years of a stationary background. On a more statistical front, SMT’s scoring software will infuse these 2D and 3D graphics with accurate data through a custom-built interface system. One of these new activations is real-time tracking of the cars via optical in-car pointers powered by Vizrt’s Viz engine.

Another feature, one that focuses on the physical attributes of both the driver and the car, will put the fan into the cockpit. Using a prototype version of the WHOOP exercise bracelet, SMT will monitor the heart rate of five drivers throughout the weekend: No. 11 Denny Hamlin; No. 47 Ricky Stenhouse Jr., and No. 99 Daniel Suárez in the NASCAR Cup Series and No. 27 Jeb Burton and No. 11 Daniel Hemric in the NASCAR Xfinity Series.

“We have our system modified to retrieve that live information from them, and it has become part of the elements that we render,” says Weemaes. “We started doing it last year with the Camping World SRX Series on CBS Sports. Lead Producer Pam Miller was very supportive and knew what we could do with it.”

Any new invention requires trust and open communication with the drivers in the field as well as with Fox Sports NASCAR Cup Series Producer Barry Landis. This could be seen as a massive hurdle to overcome, but, for Weemaes and company, Fox Sports’ long history at this race and within NASCAR makes the process a lot easier.

“Most of [the drivers] were okay with [the bracelet] since they’re familiar with it,” he adds. “This is our 23rd season in NASCAR and the ninth season with the same vectors on the roof, so these drivers are very familiar with us and how we work.”

A New Way of Tracking: Crew Works With Vizrt for New AI Tracking

Sunday’s race will be a debut for Vizrt’s AI-driven graphics, but the process of bringing this technology to fruition was a difficult task. Originally outfitted for sporting events including humans, Vizrt developed the solution to accommodate high-speed motorsports. While this innovation has been in the works for years, the company approached Fox Sports’ SVP, Graphic Technology and Integration Zach Fields with this concept beginning in December 2021 to January 2022. At that time, the NASCAR season was right around the corner, and the quick turnaround time was the most challenging aspect.

“When we decided that we were going to do this for the upcoming season, we had about four weeks to get it ready for air,” says Pino Barile, sales manager, Vizrt. “It was a very intense process.”

Initial testing began with the Busch Clash at the Coliseum in Los Angeles. This exhibition race allowed the AI technology to understand the physical structure of the Next Gen car and fine-tune the different lighting scenarios that the crew would experience during the lead-up to the Daytona 500, including the nighttime Duel races. The preseason contest allowed the team to understand Fox Sports and SMT’s production workflow, and how the object tracker graphics should look and behave.

“Due to the beta stage the new technology evolved tremendously during the test days” says Richard Einstein, senior product manager, Vizrt. “One good example were the number of objects that could be tracked simultaneously. We wanted to go save and start only with one tracked object. Our team did a great job to react fast on the production request to track multiple objects at the same time”

Unlike traditional GPS-oriented elements, the new Viz AI Object tracker only requires a video feed as ingest, and no additional hardware at the venue. Through refined scans of the cars and the ability to control what the software is able to track, graphics that include the driver’s name, place, and speed will be integrated into the video feeds of the onboard POV cameras. While this new implementation came together quickly, Vizrt’s relationship with Fox Sports’ NASCAR team was an advantage.

“I was in Los Angeles, Richard was in Brazil, some of our staff were in Italy and in Daytona, and SMT’s team was onsite for the Clash and will be in Daytona,” adds Barile. “We could not be happier at how we all put everything together through remote systems.”

Fans who enjoy the analytical side of the Daytona 500 will be treated to an even broader offering of statistics. Through vectors installed inside the roof of the car — which was done by one person from the SMT team to adhere to COVID-19 safety — both on-screen and team analytics will showcase new information on all cars on the track. As for the virtual GhostCar used to compare the pace of a pair of drivers, the overlay will reflect the exterior changes to the car, including the single lug nut on each tire and other touches by the Ford, Chevrolet, and Toyota teams. SMT was able to replicate these alterations through 3D files sent by NASCAR and car scans sent by Fox Sports. Given the mix of telemetric data and up-to-date car locations, SMT is hoping to present an engaging variety of insights.

“I can now output full virtual video with charts, which we hadn’t been able to do before,” says AJ Mead, digital product manager, SMT. “For example, [race analyst] Clint Boyer can use this to dissect a driver’s launch in qualifying, look at their throttle, and talk about shifting.”

These charts will also include a leaderboard based on lap time for practice and qualifying; a bird’s-eye, side-by-side view in virtual video; and a “focus mode” setting. Teams are able to access this treasure trove of knowledge, and, heading into Sunday, SMT has brought on new clients to reach a total of 37 Cup Series teams and 26 Xfinity Series teams.

After a small audience at the race last year, Sunday’s edition is expecting a sellout crowd. To match fans’ passion for the most famous race on the NASCAR calendar, NASCAR Productions will pull out all the stops to entertain the throngs of supporters in the grandstands. The NASCAR crew will tap into the cameras hosted at the venue, and, for a more simplified approach, SMT will once again provide feeds of these analytics to their team for added flavor. Unlike in years past, SMT Coordinating Producer Nick Rider will be leading this effort and solving any problems onsite in the compound; the NASCAR team is stationed offsite.

“[The videoboard show] used to be done in NEP’s SRT truck in previous years, but now, NASCAR has streamlined that operation to be self-contained in Charlotte,” adds Weemaes. “That was one of the effects from COVID-19.”

On the main broadcast, racing fans will experience the Daytona 500 in 1080p HDR. Similar to the stylistic changes to graphics, SMT also needed to bring 1080p HDR workflows into its onsite mobile unit. The task began with an onsite van with 1080p HDR-capable technologies for the Clash. With the main truck in Daytona, it took a much bigger effort to get this infrastructure in order.

“We had to upgrade a lot of equipment to make sure everything could pass 1080p HDR, for which we did internal testing on two races on Fox last year,” says Chris Stoddard, engineer-in-charge, SMT. “We’re converting a few of our software programs to 1080i, which works fine for the race, but everything we have that’s video passing through graphics is 1080p HDR to match Fox’s workflows.”

Including Weemaes, Stoddard, Mead, and Associate Producer Nate Karamanski, a total of 12 onsite staffers will facilitate their roles from outside Daytona International Speedway. It’s a major improvement from last year’s Daytona 500, and a welcome sight for a high-profile season opener.

“We always have an onsite and remote crew,” says Weemaes, “but, during the pandemic, there was a very limited number of people onsite. We normally have six staffers onsite, but, since the first race is the biggest one of the year, we have double the amount of people here for training purposes and to make sure that the truck is up and running.”