Inside the ‘SmartCage’: Data Sits at the Center of the Professional Fighters League Universe 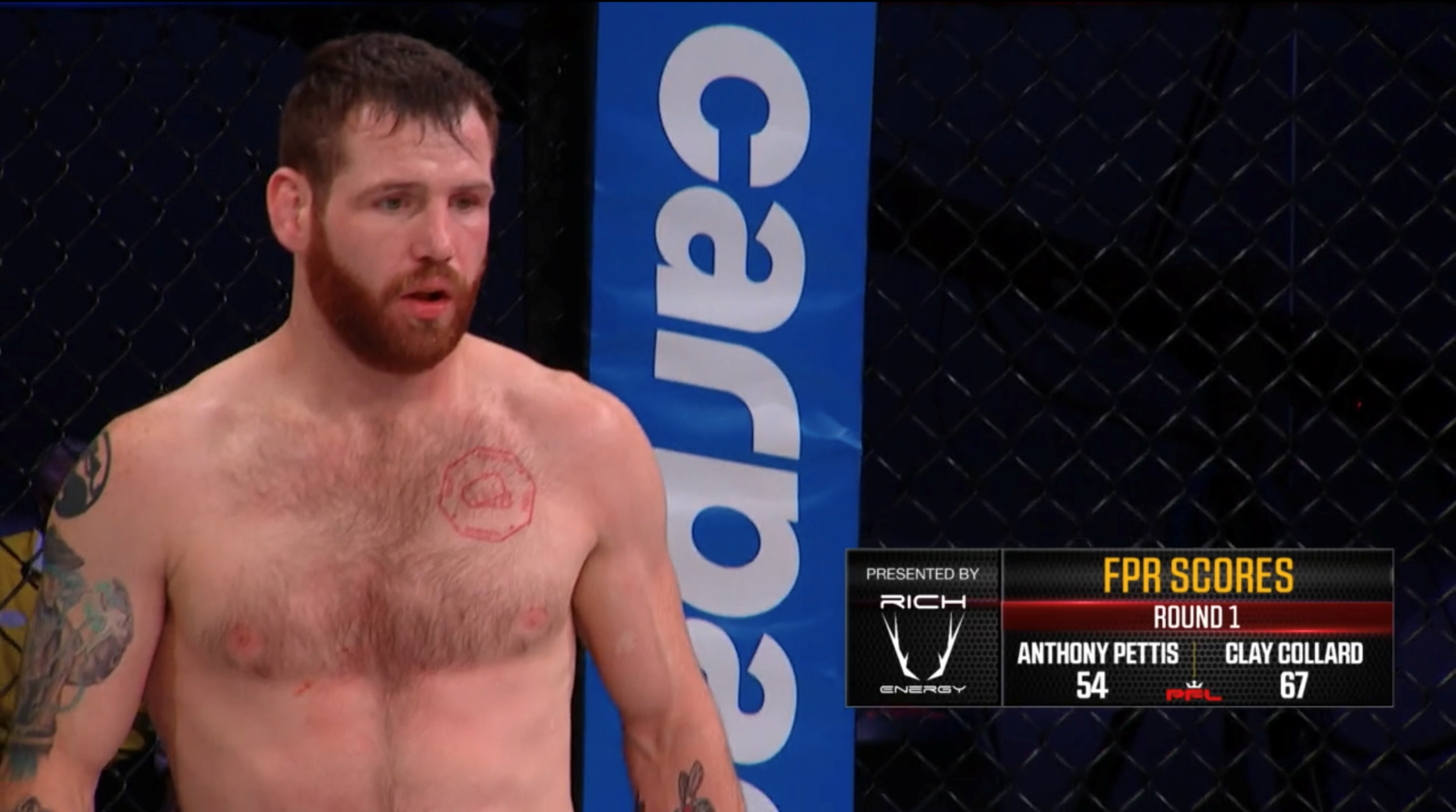 Although sports leagues across the globe have widely embraced the use of data feeds and next-gen stats in recent years, nowhere is data more core to a sports organization’s mission than at Pro Fighters League. With fights taking place inside a “SmartCage” and broadcasts overflowing with fighter metrics like punch speed, power ratings, heart-rate tracking, and energy exerted, PFL has made data the axis on which it spins.

This year, PFL is diving even deeper into the data pool with its partner SMT, launching a Fighter Performance Rating metric similar to the NFL’s QB rating and introducing a kick-speed metric later this season.

“I think data is essential for any sport and needs to be there so fans can appreciate and evaluate how participants are performing,” says Professional Fighters League Executive Producer George Greenberg. “So we provide as much data as possible to the viewer. We believe that next-gen MMA is very much dependent on data and information because, let’s face it, 18- and 34-year-olds love information.

“This is a true brand differentiator for us,” he continues. “What our production team has done in presenting this information in a really educational and entertaining fashion is very specific to us and unlike any other MMA brand.”

The third PFL season (the 2020 season was canceled due to the pandemic) kicked off in April in a strict bubble environment at Ocean Casino Resort in Atlantic City, NJ, with no fans in attendance. After three consecutive weeks of Thursday-night events, PFL — the only MMA league with a regular season and playoff structure — will resume action on June 10 with broadcasts airing on ESPN, ESPN+, ESPN Deportes, and other media partners around the world.

PFL has partnered with Tupelo Honey to provide onsite facilities and below-the-line crew and has enlisted industry veteran Larry Rogers of First In TV to serve as tech producer for the technology-laced shows.

While PFL’s production team (led by Greenberg, producer John Faratzis, and director Rich Dewey) is onsite in Atlantic City for the events, housed in F&F Productions’ GTX-16 A and B units, 10+ operators support the show remotely from SMT headquarters in Durham, NC. The Atlantic City and Durham operations are connected via BitFire Networks’ video-transport and remote-distribution platform.

“We looked at a lot of different scenarios and different venues,” says Faratzis. “Initially, we were thinking of going full REMI with fewer people onsite, but our thinking evolved as the situation changed and more people became inoculated. So we are onsite with a couple of mobile units, and we are working closely with our friends at SMT to handle all the data and graphics [aspects of the show from Durham].”

PFL’s fighter-tracking data, dubbed “Cagenomics,” plays a vital role in its broadcasts and is driven by SMT’s OASIS Platform, which seamlessly integrates and combines live scoring with biometric and positional data.

“The constant flow of data that we have is unlike any other mixed-martial-arts group or even boxing,” says Greenberg. “We have a tremendous flow of information, and we like to give that information to the viewer as soon as we have it, because we believe it helps tell the story for the viewer.”

In addition to optical and chip-based tracking devices throughout the SmartCage, SMT has developed sensors worn inside PFL gloves to transmit live punch speed data. Each fighter is outfitted with a tag for each glove, each with a unique ID, that transmits data to 16 SMT-developed readers positioned around and under the decagon. In addition to strike speed, SMT is able to offer other advanced biometrics, such as power ratings, heart rate, and energy exerted.

Data provided by SMT is displayed on the stats prompter for the commentators and is integrated into on-air graphics, including PFL’s scorebug, which features stats like strike speed, arm/leg/total strikes, ground strikes, and takedowns during fights.

New to the 2021 PFL season is Fighter Performance Rating (FPR), a metric that shows fans how rounds are won or lost based on weighted stats collected by ringside spotters. These stats are relayed to SMT inputters in Durham and integrated into on-air graphics at the end of each round.

“Everybody loves a QB Rating or a batting average,” says Greenberg. “Collectively, as a group, we felt that it was important to have that kind of all-encompassing metric [for PFL]. We use it to compare fighters within divisions, so it’s a pretty cool tool that is exclusive to us,”

In addition to being graphically displayed after each round and after the fight, FPR plays a major role in “The Verdict,” in which fans can add round-by-round scoring for each bout and cast their vote for the winner.

“As a viewer,” says Greenberg, “you can take our FPR, the Verdict vote from the fans, and our announcers’ analysis and compare all that when a judge makes the decision. We think it’s an effective and entertaining way to judge for yourself how a fight was scored and how the judges did.”

PFL and SMT are also developing a kick-speed system — a first in MMA — that uses optical tracking to determine the velocity of kicks since putting a tracking chip on a fighter’s foot was not an option. Currently in beta testing, kick-speed tracking is expected to debut in time for the PFL Playoffs, which begin in Week 7, and says it will be used primarily on replays rather than live.

“With the punch speed, you can put a chip in the glove,” Greenberg explains, “but, with kick speed, you obviously can’t, so it presents more of a challenge. Technology is our friend, and we’re not afraid of it. Occasionally, you’re going to have a failure, but you have to be bold enough to test it. We’ve got cameras mounted overhead to capture [kick speed], and our faith is in SMT.”

PFL rolls out a robust camera complement for each event to cover not only the decagon cage but also fighter walk-out and behind-the-scenes coverage.

Chief among PFL’s camera innovations is the GhostCam, a robotic rail-based system provided by Inertia Unlimited that “makes the cage disappear” when shooting action through the cage. The rail allows the camera to be remotely controlled and repositioned during fights.

“When you zoom in and you’re shooting through the cage, the GhostCam makes the cage disappear so you’re unobstructed,” says Faratzis. “It’s really something special and unlike anything I’ve ever seen. Other [MMA promotions] have something like it, but we have it on a rail, which is a first. It provides some absolutely amazing shots for us.”

PFL has also deployed a Dual View Steadicam, which is a Steadicam rig with two cameras — one traditional broadcast camera used for fight coverage and one mirrorless SLR camera that provides cinematic shallow-depth-of-field shots for fighter introductions.

“Now we have two cameras on one Steadicam, which is not only efficient but gives us some really great looks for fighter intros,” says Faratzis. “Instead of cutting between cameras for the introductions, we’re using that nice soft cinematic look for the entire fighter intro on a Steadicam, which offers a cool and intimate look. Then, we can switch to [the broadcast camera] and still get those more traditional Steadicam shots in the [broadcast].”

PFL also deployed a RefCam to give the referee’s view of action inside the cage, robotics overhead and in each fighter’s corner to see coaches give instructions and capture their reactions, and a jib. A multitude of non-broadcast optical-tracking cameras surround the cage for SMT to calculate kick speed and other metrics.

In addition to cameras surrounding the cage, PFL deploys POV and manned cameras in fighters’ dressing rooms to capture the emotion of fighters watching their division rivals compete.

“That [behind-the-scenes access] is the biggest differentiator from other combat sports that I’ve produced,” says Faratzis. “All of our fighters have a vested interest in what’s going on. Every fighter wants to watch every other fighter in their division to see how many points they are going to score. That determines their strategy in terms of how many points they have to score to qualify for the playoffs. So it is critical to have those cameras [in the locker room], and nobody else in MMA can do that.”