Inside the NHL on ESPN Graphics Package: How a Brand-New Identity Came To Be in Just Six Months 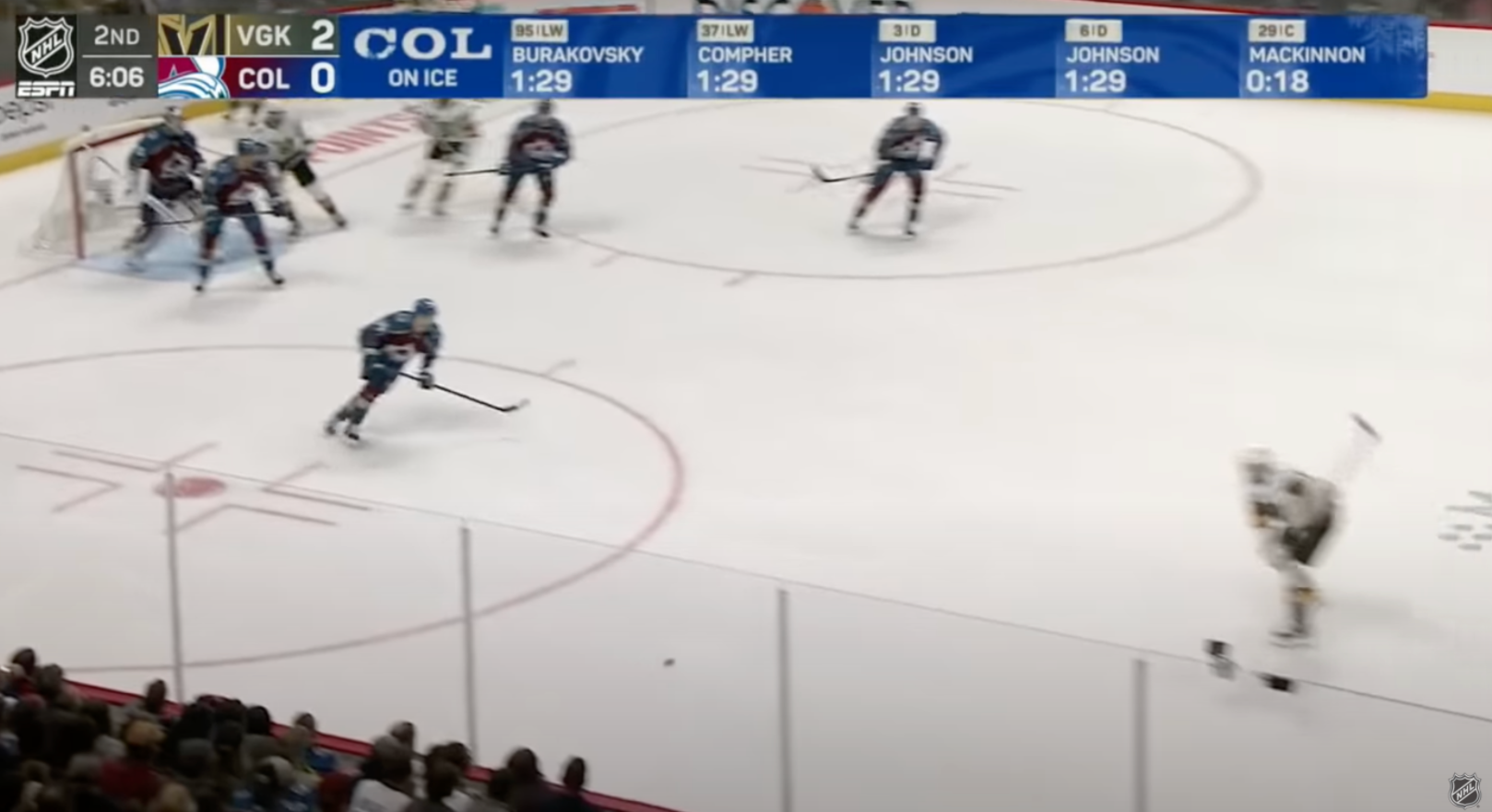 With the return of the iconic NHL on ESPN theme song, U.S. hockey fans knew what this new iteration of the NHL on ESPN sounds like. What it looks like, however, is a very different story. The ESPN Creative Studio team was tasked with the monumental undertaking of creating a fresh identity for the new rights package that could serve both ESPN’s linear and digital platforms. And it had to be done in less than six months.

“We knew we had a massive amount of work ahead of us and a very short timeframe to create [the graphics package] in a way that could be adapted to the needs of all of the different areas of the company,” says Tim O’Shaughnessy, creative director, visual storytelling, ESPN. “The music was obviously an influential theme and was good to build on from a design standpoint, but we were truly developing our own path visually.

From the get-go, the ESPN Creative Studio team aimed to create a graphics package appealing to a younger demographic and leveraging new technologies — player tracking, AR, real-time stats — while also remaining true to the history and legacy of the game.

“One key for us was designing for the future fan, not just for the existing fan,” says O’Shaughnessy. “The goal was to be authentic to the current hockey fan so they would be interested but also to have enough energy and motivation so that new fans would feel a relationship with the visual language.”

After the rights deal was announced in March, O’Shaughnessy and company began creative development in April with the goal of “combining the authenticity of legends past with the elegance of the modern game.” The team began designing the full insert package and scorebug in May and then, in June, started on the animations package in partnership with Elastic and began to finalize the type of language used.

“We knew we wanted to celebrate some of the wonderful and unique aspects of hockey and also really highlight team identities,” says O’Shaughnessy. “We wanted to lean into authenticity, but we didn’t want it to feel old-timey. We wanted high impact, energy, and intensity for younger fans but also wanted to serve the [more traditional] fan. We didn’t want to become an ice cliché, but you also can’t avoid this amazing texture with ice in hockey. There was a lot of give and take, and everything evolved over time.”

The ESPN Creative Studio built the package primarily using Maxon’s Cinema 4D software suite and leveraging both Octane and Redshift for rendering. The team also relied heavily on Adobe After Effects VFX and motion-graphics software. The majority of the team, including nearly all artists, worked remotely from home — as has been the case since early in the pandemic.

In the end, the graphics team was still making tweaks and delivering elements until the day of ESPN’s first NHL broadcast, Oct. 12. Despite the short timeline, the ESPN Creative Studio team delivered the wholly new package on schedule.

“We have some hardcore hockey fans and [recreational] hockey players on the creative team — some of our best creative visionaries — who had a lot of ideas,” says O’Shaughnessy. “A big part of the process was tapping into the group think and seeing what the team thought. With a new venture came a great opportunity to hear what everyone else had to say and let people take on more creative responsibility.”

The OTT Factor: Serving Both ESPN and ESPN+

ESPN’s NHL media-rights deal is among the most ambitious in history in terms of the OTT/streaming component. A whopping 75 national regular-season games per season will be streamed exclusively on both ESPN+ and Hulu – the most exclusive streamed games of any major U.S. sports league. With that in mind, ESPN’s Creative Studio set out to create a graphics package that could serve both ESPN linear and streaming platforms equally.

“Whenever you’re talking about [creating graphics for] multiple screens, you have two main challenges,” says O’Shaughnessy. “The first is the age-old challenge of size, scale, legibility, and impact, and you solve for that simply by testing as much as possible on every device possible. But the second, and probably more challenging, is brand integration; we didn’t want to be just tacking on logos everywhere depending on which [platform the game] was on. We needed it to be more seamless than that.”

ESPN was able to build a future-proof design system with a universally adaptable branding language for use across all linear and direct-to-consumer platforms. This way, the system seamlessly can funnel either the ESPN or ESPN+ brand into the graphics elements.

“It’s essentially a double delivery,” notes O’Shaughnessy, “but the way we built it was very compartmentalized. You’ll see that there’s not a lot of big rendered 3D show logos. You’re not going to see a big rotating ESPN or ESPN+ logo; instead, you’re going to see a bunch of interesting, heavy 3D animation with a 2D logo on top of it. That was intentional because it streamlines [the workflow]. We can brand independently on top of those dynamic 3D animations in a fluid 2D manner.”

The Scorebug: The Axis on Which the Package Spins

Every great graphics package must have a great clock-and-scorebug graphic, and the NHL on ESPN package does. During early development, Art Director Kynna Randall led an exhaustive audit of scorebugs currently used in the industry to evaluate size, structure, and ways to convey information. After that, the team produced several iterations of the scorebug before finally landing on a stacked-style graphic in the top left of the screen.

“The bug that we have right now is probably twice the size of bug that we started with, which was very small,” says O’Shaughnessy. “But it was important to remember that this package isn’t built just for linear; it’s built for your phone as well. So we kept beefing it up.

“Another key factor,” he continues, “was also making sure that the NHL shield was as strong as possible because we wanted it to be an identical imprint on the watermark in replays.”

Using the area from the right edge of the bug to the far edge of the screen, the ESPN graphics team has small, medium, large, and extra-large areas to display information more commonly shown as lower-thirds (such as shots on goal, saves, time on ice, starting lines, and other key stats). These areas can also be used for unique ad content, such as customized designs or promos. The bug has a slide-up/slide-down feature to display stats for each team on the top or bottom of the graphic.

“It’s not just about the bug; it’s the areas around the bug that have function,” says O’Shaughnessy. “It has become a key information display area for us, and it opens up the screen a lot for sure.”

In addition to emphasizing the NHL on ESPN identity, ESPN Creative Studio looked to inject team identity. For example, some team-specific graphics have ice effects growing on the logo, and others have team logos sculpted in ice and ink injections filling the color forms.

“Hockey has some of the best logos in sports,” says O’Shaughnessy. “Fans really relate to them so we wanted to celebrate them. We have developed a lot of team-based designs that were easily replicatable yet also visually appealing. There’s a lot of interesting plays on team identities in this look, and I think they’re probably some of the best we’ve ever done.”

While the NHL on ESPN package is already quite colorful (based primarily on yellow, black, teal, and gray), bringing in team identities allows ESPN to mix the color palette within its NHL broadcasts.

“When you lean into team identities,” says O’Shaughnessy, “that’s where you get to inject new energy and new color palettes into the world. Otherwise, the color palette you create for your native package will be what is predominantly seen on screen. Injecting team color allows you to celebrate the brands and create some color diversity.

This year, the NHL has put a major emphasis on its EDGE puck- and player-tracking system powered by SMT, and it played a major role in ESPN’s design philosophy for the new graphics package.

“There’s a whole mass of information that we now have the ability to showcase on screen,” O’Shaughnessy adds. “That’s only going to increase as we get our footing. Throughout the season, you will see more and more of that because amplifying the new, unique statistics of hockey is one of the priorities for the production.”

In addition to the player- and puck-tracking graphics, augmented-reality graphics will play a vital role in ESPN’s presentation of NHL hockey. The broadcaster’s virtual/AR-graphics designs were locked in early in the development process because of the complexity and heavy tech lift required for these elements. However, according to O’Shaughnessy, there is plenty more coming in the use of AR on ESPN’s NHL coverage.

“You saw some virtual executions in the first few games, especially for lineups and [player/team] comparisons,” he says. “Everything is getting tightened up as we proceed. We definitely have a couple of camera angles that we are looking at specifically to put our virtual [graphics] on — looks that are relatively unique and I don’t think have been seen by the viewer. It will be arena-specific, but there are definitely some goodies in the bag that will come out.”

Future-Proof Model: Creating a Sustainable System for the Unexpected

The new graphics system is flexible and adaptable for any potential NHL on ESPN properties. In addition to possible studio programs and event-based shows, O’Shaughnessy says, the graphics system will be able to seamlessly bring in new team logos should NHL franchises change their identities.

“Future-proofing means that whatever we just created is built in a flexible, modular way so that it should be able to live on successfully for a very long time,” he says. “If ESPN came up with a new NHL show tomorrow that has to air on any [platform], we could put it into our logo system and crank out the many elements needed to put on a show extremely quickly.

“I’ve seen, time and time again, productions roll out and then, all of a sudden, you get a scheduling show, a preseason preview show, a recap show, a MegaCast, or something else,” O’Shaughnessy notes. “We have been through this rodeo enough to know that plenty of unforeseeable things could be needed in the future. If you build a sustainable [system] to handle that, you’ve done the entire company a favor because it won’t require a heavy lift when the time comes. That’s true future-proofing.”

Looking Back: A Team Effort All Around

Although the NHL on ESPN graphics package has been live for nearly three weeks, there is still much work to be done, O’Shaughnessy says, including preparing for the NHL All-Star Game in January and the Stanley Cup Playoffs next spring. However, he does take a moment to reflect on how much his team was able to accomplish in just six short months.

“Our entire team overperformed in every possible way,” he says. “There isn’t a person on the entire team who didn’t go above and beyond. It was an absolute whirlwind, but I’m so proud of everybody for what they’ve done. This team created a brand-new production that didn’t previously exist, and I think they set a new standard for what hockey can look like. At the same time, they also created an adaptive world that is sustainable for the future of our business model. And they did both those things in hardly any time at all.”