Inside the First-Ever NFL Broadcast in 4K HDR 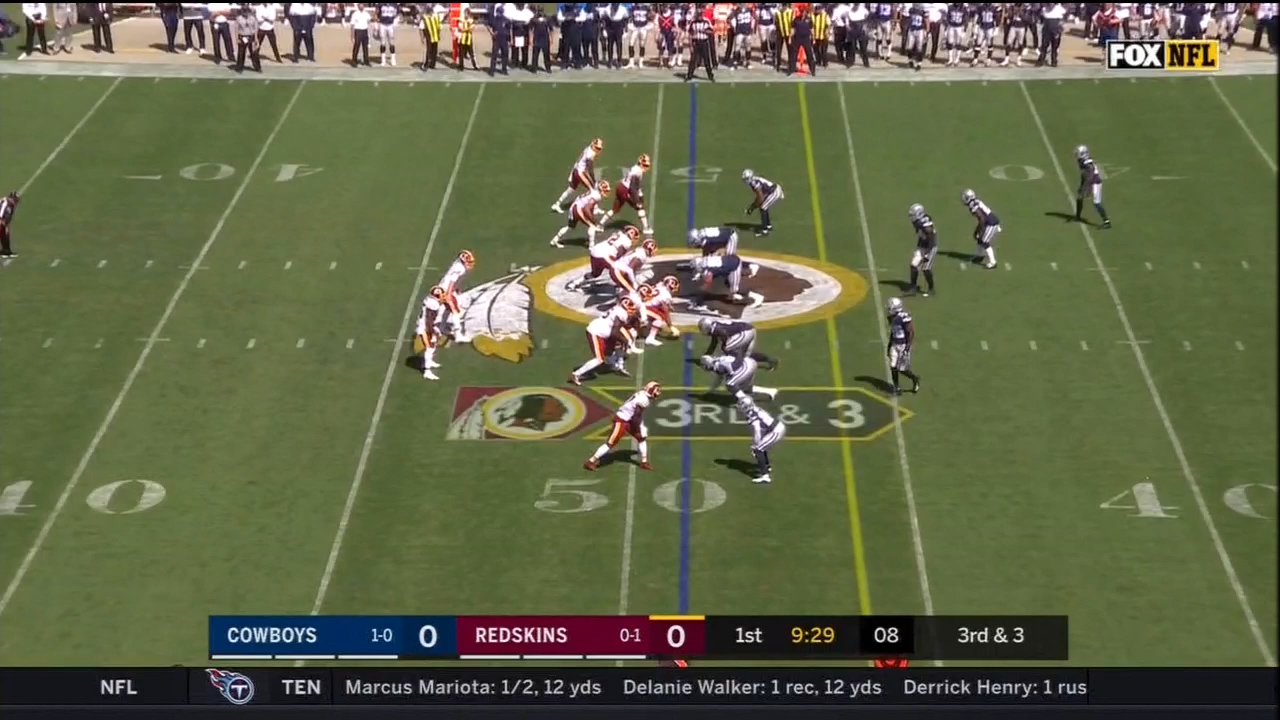 Yes, the yellow line will be in HDR

Fox Sports is distributing Thursday Night Football in 4K HDR for the rest of the season, which means September 26th’s matchup between the Green Bay Packers and the Philadelphia Eagles marks the first time an NFL game will be delivered in ultra high definition. It’s a big day for Fox Sports, which has been testing and preparing its 4K HDR distribution system for several weeks dating back to the preseason. Tonight marks the first time that system will be put to the test, and it’s during a national prime-time game between two very popular teams. And Fox Sports tells us that some MLB postseason games will also be in 4K HDR, so there’s a lot more to come from other sports as well.

It’s an exciting step forward for live sports in the US, but the press release came with a caveat: the game will still be produced in 1080p HDR and get upscaled to 4K for delivery. That’s because the broadcast equipment needed to produce an entire NFL game, especially the slow-motion systems, are still in 1080p, according to Mike Davies, SVP of field operations for Fox Sports.

“With 4K, I mean, you’re obviously talking about just a ton of pixels,” Davies told The Verge. “A lot of the broadcast equipment that does specialty things, like super-slow-motion and replay and those types of things, are technically possible in 4K. But at the volume that we have for a Thursday Night Football game, which is upwards of 40 cameras, you just can’t pack that in yet in terms of a 4K broadcast. So we do the next best thing, which is 1080p HDR. And we concentrate on the [HDR] color space, which is really pretty cool. And we do that so that we don’t compromise most of the audience who’s watching, which is going to be the good old 720p broadcast.”

We sat down with Davies to talk about how Fox Sports is producing the first NFL game in 4K HDR, why HDR is a harder problem than 4K itself, and how he thinks the future of 4K HDR formats is going to shake out.

This interview has been lightly edited for clarity.

On the equipment Fox Sports needs to produce the game in 4K HDR:

A lot of the broadcast stuff that’s available today can do exactly what it normally does in 4K SDR, but there’s a lot of equipment that doesn’t, and one of the big ones is super motion. Some broadcasters will say that they’re broadcasting everything in 4K, and that may be true. But when you get to the replay part, they might be upscaling their entire replay apparatus, or a good portion of their cameras are actually upscaled at the truck.

So we do actually have a few 4K cameras here. And we use them mainly for what we call “zoom crop” — basically shooting a very wide field of view and then using downscaling technology to magnify areas of interest. But our eight super motion cameras, these cameras that go anywhere from 4-6-8 times [slower], that stuff just doesn’t work in 4K yet. They do have high-speed 4K cameras, but the workflow is such that it would actually be a detriment to the final product if you went and did it all in 4K.

What happens is that we capture everything right at the camera heads at 1080p HDR, and then we produce the whole show as we have actually since the Miami preseason game. We do that all in 1080p HDR. And then do two things to it: number one, we upscale it to 4K for the 4K distributors, and then we have to downscale it for the wider audience to good old 720p SDR.

On what you can expect to see with the game in 4K HDR:

Especially at night, what you’ll see is the great specular highlights off of the helmets. The grass looks richer, the team colors look more true, and you also get a lot more in the blacks as well. So when you’re shooting into a helmet, and you’re trying to get a player’s reaction, you’re limited because they’ve got a helmet on. You can actually see a little bit more of that sort of expression.

It’s pretty cool to see it, especially in a night game. It really pops. It looks more like a cinematic broadcast than a TV broadcast.

It sounds like you’re actually more focused on HDR than on the 4K resolution itself.

Yes. Unlike just rote upconversion and downconversion where it’s just really a function of mathematics, [HDR] is a function of subjective authoring in terms of what the colors look like. Yes, you get the bigger color space, but, ultimately, it’s up to the beholder to say whether it looks good or not. And that has to do with lookup tables and other types of conversions that end up making the color true on both sides. Frankly, it’s a pain in the butt.

And then you’ve got to make sure that you’re serving two masters equally: you’re serving the HDR realm with the best possible HDR color space, and that comes right from the folks that are operating video in the back of the truck here, and shading the cameras in high dynamic range. But when you’re doing that, you need to make sure that what’s translated for the wider audience in SDR isn’t messed up.

The hardest thing is actually the down conversions for everybody else. So when you’re feeding the stadium here at Lambeau [Field in Green Bay, Wisconsin], they’re not taking HDR. When you’re feeding our partner here, the NFL Network, on their pregame show, they’re not taking HDR. So there’s a hell of a lot of conversion going on, not only from SDR to HDR, but actually, more importantly, from HDR to SDR.

And you’re looking at certain colors that are important. For instance, if you have a sponsor, and they’ve got a primary color of red [Ed note: obviously Verizon], you want to make sure that that red looks the same in HDR and SDR. You don’t want to go in and start mucking around with the colors. You’ve got to actually do tests where you go from SDR to HDR and then back to SDR, and then make sure that all of the colors in those translations still remain true for both audiences.

So is the yellow line rendered in HDR?

The yellow line is in HDR. It needs to be. This was one of the things that would have been a different conversation last year. Some of the virtual stuff wasn’t ready, not only to go to 4K, but even 1080p. So a lot of times, we’d take some of the main cameras, and we’d have to downscale them to insert the stuff and then re-upscale them.

This year, we’ve been actually doing the shows in 1080p HDR for the past three games, even though it really hasn’t been going anywhere except for testing. So now that we’re here in Green Bay and people are going to see it in HDR, hopefully we’ll have a good experience.

On the brewing HDR format war between Dolby Vision, HDR10, and HLG:

Most of the broadcast equipment — particularly the Sony stuff, which is the cameras and a lot of the infrastructure that we use — they operate in HLG.

You know, it’s just going to be “4K HDR”, and then the only battle that needs to be waged is: okay, does Dolby Vision win or does HLG win? And to be honest, that’s kind of a thorny issue because the distribution formats are siding with [Dolby Vision and HDR10]. But you know, in production, especially live production, and maybe we’re a little bit more in this right now, it’s HLG. And that’s a battle of the vendors right now. You go talk to Sony, and they’re very into HLG.

So yeah, we deliver it in HLG. We’re in this interesting time where I can do [4K HDR] on the TV side and put it up and get it to a transmission point. And then, obviously, your 4K TV that’s able to do HDR is able to get it.

It’s sort of that bit in between that is getting sorted out right now.

What’s the thing you’re most excited to learn during the broadcast?

Doing the first one is going to teach us what the fans think. Can they tell the difference? Because I’ve been looking at it and, quite honestly, the case to be made for 4K HDR UHD versus SD to HD is a little bit harder to make. With HD, at least you could say the screens were bigger. With this, it takes a little bit more of a subtle eye to see it.

That’s really the challenge that I’m looking for because, frankly, in the technical realm, I’ve already done this three times.

What’s next for sports in 4K HDR?

If I were to say that what we’re doing in September 2019 is exactly the same thing that we’ll be doing in September 2020... the exciting and somewhat frustrating part is that I just don’t know. I’m trying to build facilities that can handle everything up to 4K, and we’re certainly keeping an eye on the manufacturers and super motion and that kind of thing.

You know, the Tesla that you buy today is not the same as the Tesla that you’ll have tomorrow because of software upgrades. And that’s now true of everything in these trucks. It didn’t use to be. So at least that gives us the ability to buy stuff that allows us to be flexible for the market.

So I think the answer to your question is that, last year, we did a hell of a lot less UHD than we do today. So I would imagine that, next year, we’ll be doing a lot more UHD than we did this year.