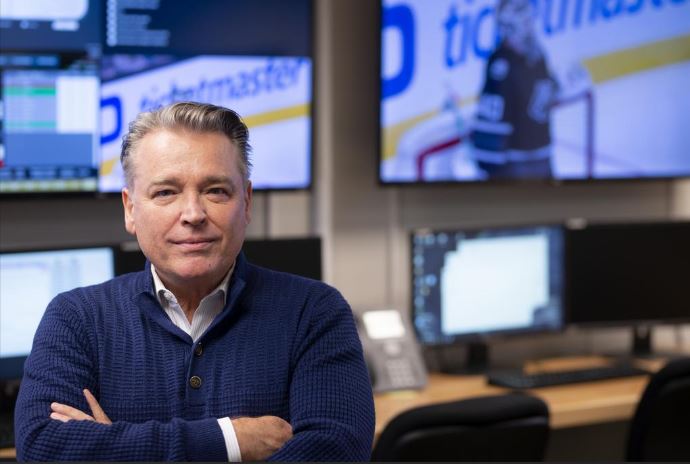 For Gerard Hall,innovation is par for the course – pun intended.

Hall, CEO of Durham’s SMT – formerly known as SportsMedia Technology Corporation – has pioneered much of what sports fans take for granted on their screens, including the yellow line shown in football broadcasts.

And his firm is doing it again, getting ready to debut a technology that uses infrared tracking technology to follow the puck at hockey games – including those at PNC Arena, home of the Carolina Hurricanes.

By deploying a modified puck and chips on players’ uniforms, fans will have an unprecedented amount of data as they watch the game, he says.

“We can literally put a trail on the puck and show the arc of it,” Hall says.

That’s just the latest chapter for the firm, which began in 1988 and was formally incorporated in 1990. Hall began by creating a scoring system for PGA events. It was initially an “enhancement” for one of their sponsors, Epson, which was putting a computer in every hospitality tent.

“PGA events back then were being scored by walkie-talkies,” he recalls. “I put a device on every green, networked it through a radio system.”

Hall quickly realized television broadcasters weren’t getting real-time information.So he put a computer in front of their graphics person.

“They could see what was going on in the event, – live,” Hall says. “By creating a scoring system, it gave them all that live information. It helped them track their storytelling.”

And by creating an interface between the scoring system and a broadcaster’s graphics system, the information could get out quickly.

From there, he tried the technology with other sports – designing a system to interface with NASCAR.

“Before 1995, you’re screaming at the screen, ‘What the hell is the score?’” he says. “Now you look at sports and the score bug is constantly on the screen.”

SMT spiraled from there,creating the virtual insertion graphic that became the yellow first-down line for football.

SMT released a “virtual strike zone” for baseball. In 1996, it created the “glowing hockey puck” for Fox, Hall says.

“It’s just been a series of things,” he says, noting it was recently certified to put its “lines” on soccer fields.

He was born in Scotland.His parents immigrated to South Jersey when he was 3 years old.

While still a grad student, Hall put in a bid to design a scoring system for the PGA and – at virtually the same time – on Halloween in 1988, he moved to the Triangle. One of the engineers Hall had worked with had taken a job in the region, and they needed a marketing manager.  Hall ended up teaming up with Epson and never returned to finish his graduate studies.

He admits his brain works differently than that of some of his peer CEOs. A chess player, Hall sees“patterns.” And he calls luck when “preparation meets an opportunity.”

“If you have prepared yourself for when opportunities open up, you have to seize them when they happen,” Hall says.

And that’s what he’s always done — and he’s nowhere near finished.

“A lot of people are looking at the situation and our platform,” Hall says. “Whether it works for hockey or cricket ... it’s a scaleable platform.”

As for the new puck system, he says the NHL is taking a unique approach. While some leagues install a tracking system then leave it to the broadcasters, the NHL has made major investments – both in the tracking system and an official scoring platform that absorbs that data. It creates a feed that generates sports statistics – and can be distributed to multiple entities. And SMT is acting as a partner, installing graphic engines in NHL arenas.

“From the time this thing debuts, every single broadcaster on the NHL … whether you’re a local broadcaster in Buffalo or Raleigh … you get the full benefit of all the tools,”Hall says. “You would need to hit a single button and drop in all these graphics.”

The technology will get a public debut at the Consumer Electronics Show in Las Vegas, but the real debut will be at the NHL All-Star Game in St. Louis on Jan. 25. By the start of playoffs in April, he expects full deployment in 16 arenas. And it will be fully up and running for everyone by the start of next season.