A Year After Winning the Daytona 500, Michael McDowell Is Still Riding Analytics 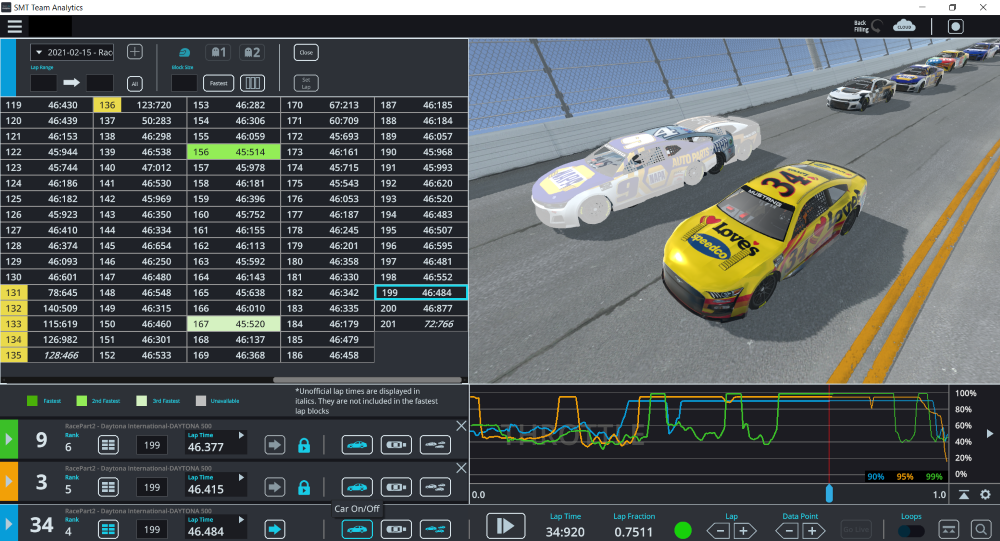 Michael McDowell had driven on the NASCAR Cup Series for 13 years with only three top-five finishes and no wins until the beginning of the 2021 season. Then, in last year’s Daytona 500, McDowell—who entered the race as a 100/1 longshot—prevailed to win his first Cup Series in 358 career starts.

Proving it was no aberration, he drove another reputable race at Sunday's 2022 Daytona 500, taking 7th place at a crowded finish line.

A closer look at the stats shows that McDowell, who drives the No. 34 Ford for Front Row Motorsports, has been steadily improving on superspeedway tracks in recent years, owing to his own studies of video and data through the SMT Team Analytics platform. Now 37, McDowell had a career-best five top-10 finishes in 2021 with the Daytona win and a third place in the GEICO 500 at Talladega Superspeedway. He made the Cup playoffs and finished 16th.

Winning the Daytona 500 “helped significantly” from a sponsorship standpoint, McDowell has said. Other than his primary sponsor, Love’s Travel Stops, his most recent backer is Celsius Health Energy, with whom he originally signed with for the eNSACAR Pro Invitational at the beginning of the pandemic and has now added as a full sponsor.

He discussed his ascension with SportTechie last week, before Sunday's Daytona 500:

On preparing for Daytona last year . . .

I know that Daytona is definitely my best opportunity at getting a win. There's a couple of reasons. The obvious one is that Daytona, for whatever [reason], however the rules package is and that style of racing, seems to close the gap for us between the top teams and our team.

And the other reason is that, for me, I just became a student of superspeedway racing. People talk about, ‘Oh, it's just luck, and you’ve just got to be at the right place at the right time, and anybody can win those races.’ But what I learned by looking at actual statistics is that that's not really the case. It's the same five or six guys that win those races every year. And if you look over the last 10 years, there is a group of guys that constantly contend for those wins at Talladega and Daytona.

So I started to study those guys and started to figure out, ‘What do they do? How do they process it?’ And then you try to get into the psychology of, ‘What's making them make that decision? What are they thinking about? What are they processing that maybe I'm not processing or doing something different?’ So I just watched a lot of film, looked at a lot of data and studied the guys that were really good at it. And [that] took me a few years, but I feel like now I'm one of those guys that's good at it. Not just with the win last year, I think from a top-10 and top-five standpoint, my Daytona statistics the last five years are as good as anyone's.

We actually have a system called SMT. And what that does is it allows you to be in any car at any time and look at brake, throttle traces and actually study that data. And so, I can see that, with two laps to go, Denny Hamlin is dragging the brake, making sure that he's not getting too big of a lead on the car that’s second, and you get to see what they're actually doing inside the race cars with the pedals and the steering wheel and line and you can zoom out or zoom in and get a bigger picture of what's actually happening.

A lot of times when you're behind the wheel and it's so intense, you're just focused on your little bubble and the one or two cars that are around you—you can't see the full picture. So just being able to zoom out and see the full picture and see what other guys are doing and how they're processing things. When I first got into the sport, there wasn't data like that available, you couldn't look at competitors’ data, but now you can see so much. It's not clear black and white—you’ve got to kind of sift through it a little bit to get the information you need. But if you're patient and diligent, you can find the answers you're looking for.

When you're talking about superspeedway in general, Roush Yates Engines have always been super strong in superspeedways. That's something they pride themselves in. Doug Yates works really hard, and his team works really hard to run up front and have a chance to win those races; they mean a lot to him. That's a big advantage for us as a Ford team and having Roush Yates engines.

Our team approach is the same—we look at those as opportunity races. So, when it comes to where we're going to put the most amount of resources and the most amount of time and energy and development, we do it on the superspeedways knowing that that is our best opportunity. So it's not just one thing ever, right? With anything, it’s a team effort, but it's also a collective decision that we've made to really hone in and focus on these particular tracks.

Every offseason is a little bit different, depending on what you're trying to work on. Or also, too, if you have some injuries that you're working through, or you have some things that you’ve got to sort out, the offseason is that 60-day window that you have to try to get things worked out. Or if you're trying to add strength or add endurance, it all depends on where you're at and how you've been training.

For me, I've mixed it up through the years. As seasons change and life changes, and as you get older, how you train changes as well. And so, yeah, for me, it's just more of staying active, staying healthy. I cross-train two or three times a week: run, bike, and then also carting, [which] for me is a big help because it simulates driving and it's definitely physical.

I use the Garmin watch. That's good for training and also in the racecar just to help me see where everything's at. I don't use it all the time because I feel like, as racecar drivers, we become very obsessive and compulsive about things and so it becomes one of those things that you're always looking at. You're always trying to get lower, higher—all that stuff.

I found it to be a little bit of a distraction, so I use it more to just monitor, right? Like I'll put it on for a couple of the physical races that I know are going to be high intensity and just see how I'm doing and how my conditioning looks. But I stopped doing it every week, every weekend and every workout.

On his introduction to Celsius Health Energy . . .

I've been using Celsius products for over 10 years and, the last four or five years, [have] become friends with a lot of the guys there, just through racing and being in a lot of the common circles. It's been fun to learn about their growth and be a part of that and to finally officially put together a partnership. I did the iRacing partnership with them two years ago now during COVID when we couldn't get on the racetrack. So that was kind of the start of the partnership, and we've expanded now. It's fun to have like-minded partners.

On how he manages energy and hydration on race day . . .

That’s really what led me to Celsius—that there's a lot of energy drinks out there. I mean, the market is big. But for me, I wanted to make sure that I was putting something healthy in my body, that [there] wasn't going to be any side effects or harmful on race day. I use it a lot for mental clarity and focus and energy, and I'll take it prior to the race. And then when you're in the racecar, you've got water and you’ve got some other electrolytes. But for the most part in the racecar, I'm just sticking to the water. A lot of it is just the preparation that you do prior to the event. Just like every athlete has a regimen and a program that they utilize, Celcius is a part of that program for me.

I have really enjoyed it. Obviously, the Coliseum is going to be very different than Daytona, but I came from sports cars before I was in NASCAR, and to me, I feel like this is halfway in-between a sports car and our typical NASCAR stock car.

But I'm excited about the opportunity. When we talk about Daytona being one of those equalizer races, I feel like this Next Gen Car has equalized the playing field to a degree, having standardized pieces, chassis, bodies, parts—all the things that cost millions and millions of dollars to develop. A lot of research and development and engineers go into designing and building [the car]. All those teams were doing all that individually. And now, we have a single-source supplier for a lot of these parts and pieces, so I feel like it's going to allow us to be not just competitive at a handful of races, but at all of them.

On trying the Next Gen Car in the simulator . . .

The simulator is very helpful. And iRacing has done a great job of scanning the tracks and modeling everything really well. But the rules have changed quite a bit here over the last two months on the Next Gen Car going from the 550 engine package to 650 and changing some of the downforce levels. So, it's not correlating 100% right now. It's still a helpful tool, and I know that it will actually correlate here pretty soon. But it's a process, as we're figuring these cars out and figuring out what these cars need. Stuff is developing and changing pretty quickly.

On life changes after his Daytona win . . .

Not a whole lot. From a professional career standpoint, [there’s] a little bit more notoriety, obviously more opportunities as far as going and speaking and sharing your story, things like that. But honestly, all in all, it hasn't changed a tremendous amount.

I'm not trying to downplay that side of it; it's extremely rewarding. I mean, I'm so thankful that I won the Daytona 500 and that I got to experience that and really accomplish something that not a lot of people have accomplished. And for me more than anything, just feeling like all the grinding it out and the struggles [were] worth it. It means a tremendous amount to me and to my family and to our team. And it's not like it’s not life-changing—it's life-changing in some areas, but your day-to-day life doesn't change so much.