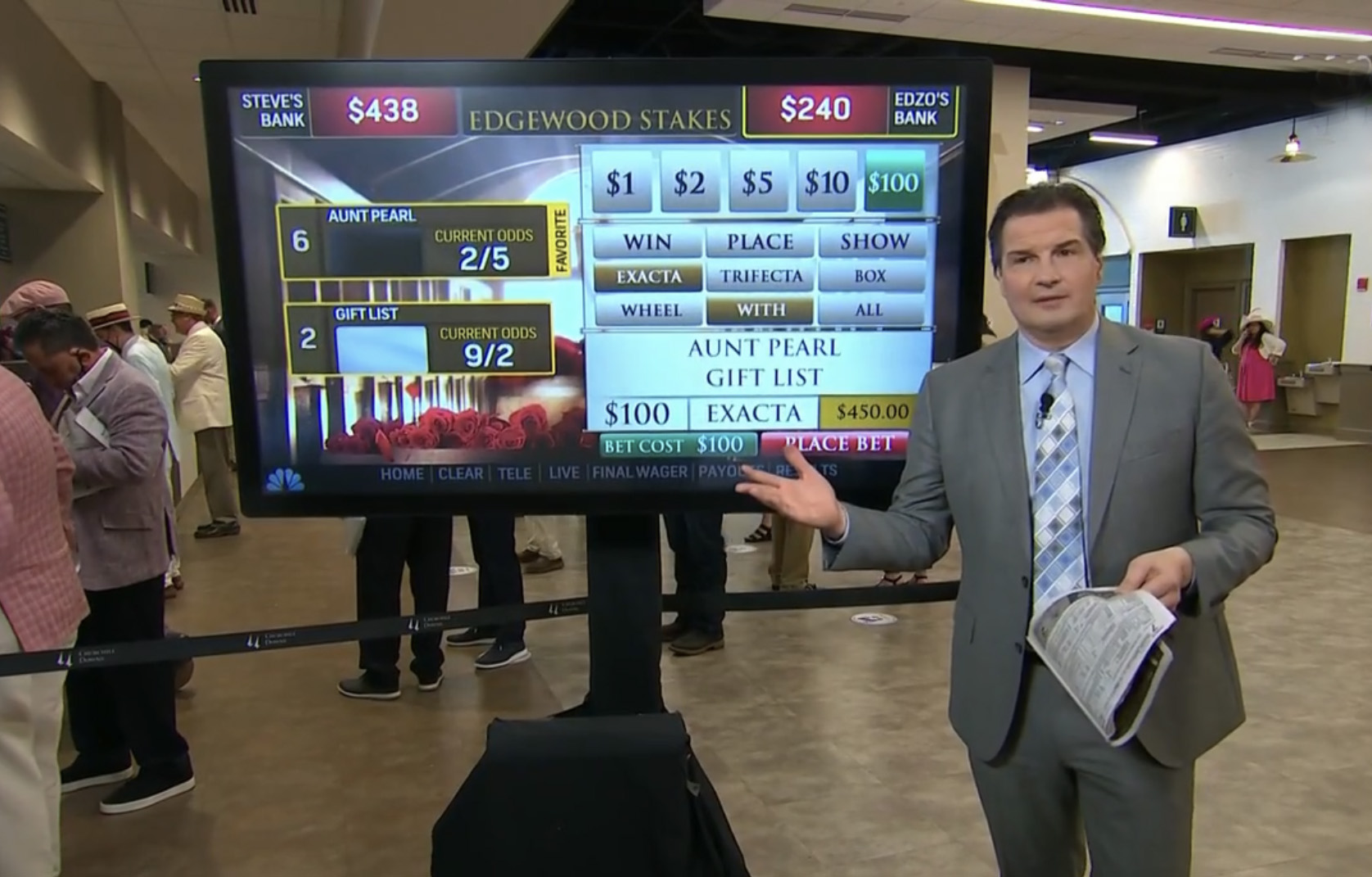 Typically one of the largest annual productions on the live-sports calendar, NBC’s Kentucky Derby broadcast last year had a significantly reduced footprint and was produced remotely due to the pandemic. This year, in a sign that live sports production is returning to some normalcy, the Peacock’s production and announce teams are back onsite at Churchill Downs, and they have plenty of new tech toys to play with.

“The big difference is, last year, we produced the show out of our [Sports Production Operations Center in] Stamford, CT,” says Rob Hyland, coordinating producer, horse-racing coverage, NBC Sports. “This year, we’re back in Louisville, and we’re very happy to be back.”

For the first time, a live drone and two live RF JockeyCam systems will be deployed in Derby coverage. In addition, NBC Sports’ backstretch Bat Cam returns for the first time since 2019, offering a perspective from 15-18 ft. above the track and traveling at up to 80 mph.

Last year’s belated Kentucky Derby broadcast was produced out of NEP EN1 mobile units parked at the loading dock in Stamford (and used NBC Sports’ NEWBERT remote flypack to bring back feeds), and nearly all on-air talent was located in Stamford. On Saturday, Hyland’s production team and the crew of more than 200 will be back in Louisville, operating out NEP ND1 A, B, C, and D mobile production units, and more than a dozen announcers are on hand at Churchill Downs.

Hyland, who has been a part of the broadcaster’s horse-racing coverage since its first Derby in 2001, joins director Drew Esocoff at the front bench inside ND1’s A unit. Coverage on NBCSN today and earlier on Saturday will be handled by producer Billy Matthews and director Kaare Numme.

“Twenty years ago, I was part of NBC’s first Kentucky Derby,” recounts Hyland. “It was about a two-hour show, with a small team of reporters, a couple of feature-story elements, and that was the lead-up to the big race. This year, we have more than a dozen announcers, a production staff of more than 200, and about 15 hours of coverage.”

50+ Cameras Around the Grounds Range From Robos to a Blimp

According to Hyland, the concept of using a drone first came up following the 2019 Derby, and NBC explored using one on the 2020 race before the pandemic nixed those plans. This year, with the Derby back in full swing, NBC opted to introduce the drone into its production.

Provided by Beverly Hills Aerials, the drone system has been outfitted with a Canon CJ20ex5B 4K broadcast zoom lens. Hyland’s team conducted rehearsals with the supplier on Wednesday and Thursday to establish a comfort level on its use within the broadcast.

Although Hyland says the exact plan for the drone is still being worked on, he envisions its covering the frontstretch much the way the Bat Cam covers the backstretch. He hopes to get at least one drone shot from the infield for each race.

“We can utilize [the drone] and take you places that we haven’t before with our traditional cameras,” Hyland says. “Specifically, wrapping around the twin spires, going between the twin spires to the paddock, from the paddock back to the front side, around the track, back to the chute where the mile chute is — where it’s hard to get cameras, a very narrow area. We believe this camera perspective will be a great — call it a magic carpet — ride for the Derby viewer of five hours of our telecast.”

NBC has worked closely with Churchill Downs to ensure that the drone does not interfere with the races and does not pose a danger to patrons at the track.

“We were worried about that with Bat Cam years ago, but horses have never noticed it in a race,” says Hyland. “Churchill Downs has been great in working with us, and the vendor has been great. Our number-one priority is safety.”

Also new for this year’s production is a pair of RF systems provided by UK-based JockeyCam and mounted to aboard jockey helmets. NBC has used JockeyCam for the Breeders Cup World Championships, but this marks the first time the system will provide in-race action at the Derby.

“We think it will be a really cool replay for both the turf races and dirt races,” says Hyland. “[It’s] an effort to bring the viewers closer to the action and give them a sense of the speed and the decision-making that goes on in each race and how fast it is.”

SMT is once again providing a trove of racing and betting data, helping drive the graphics for NBC’s broadcast, and providing the interface for interactive touchscreen displays used by handicapper/reporter Eddie Olczyk and Derby newcomer Steve Kornacki.

Having captured the cultural zeitgeist as NBC News’ data-minded political analyst during the 2020 presidential-election coverage, Kornacki joins this year’s Derby broadcast team to bring a data-centric angle to horse racing. He previously provided an election-style “big board” for NBC’s Football Night in America during the NFL Playoff race and for its ‘Triplecast” coverage of the Wood Memorial, Blue Grass Stakes, and Santa Anita Derby this month.

“Steve will be integrated throughout the show with trends and what history says about the Kentucky Derby as we look at the field,” says Hyland. “Steve will have more of a big-picture lens looking at the trends of the Derby, what history tells us, where the money’s moving.”

NBC will work closely with SMT to take snapshots of money movements throughout the day — an element new to NBC’s Derby broadcast.

“[Kornacki] will have plenty of data,” notes Hyland, “and he’ll have a big board. It will look a lot like his presentation on NBC News or MSNBC. Steve will be able to track money that’s coming on any of the individual horses in the race on Derby night, and we’ll be able to take snapshots of that and explain it to the public.”